God has blessed Mars Hill with an incredible team of men and women who love Jesus – the risen, reigning, and returning King. Together, we passionately pursue Him as we work to see the Great Commission fulfilled. Together, we study the Scriptures. We embrace and celebrate the mystery of faith and the magnificence of our AWESOME God. And we long for our Savior’s return, when we will know fully as we are fully known.

We hope that God’s redemptive work in our lives will resonate with what He’s doing in yours.

Today’s Devotional is from team member, Randy Templeton.
Randy is a Marketing Executive who is currently doing some
volunteer research and consulting on our internet ministry.

It was the week before Christmas and I was over visiting with several of my life-long single friends, including a new person I had never met, my future wife.  Sandy had with her a 6-month old baby boy, my future son, Michael.  For some reason, I was drawn to him, especially odd for a single guy, who was the baby of his family, and someone who rarely held a baby in his life. Michael as a baby had a great gift for crying, so I held him for awhile and then a while longer and eventually until he fell asleep. Sandy, I know was sure by now I was unusual. 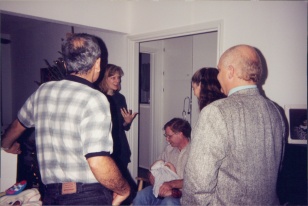 I knew of Sandy and her story from my friends, but this was my first encounter.  It had only been a little more than a year since she lost her first husband and soul mate Mike in a tragic car accident.  Not knowing then, she was only weeks pregnant with Michael. So I met her a few more times in the following months and then asked her if she would go on a date. Not my best judgment call.  I now moved from “unusual single guy” to something three steps below.  Sandy and I did not talk or see each other for the next five and a half years.

It’s now summer 2001, one of our mutual friends Lori is leaving the country for mission work in Asia. Nancy, the host of the Christmas party where I first met Sandy, and I have put together a going away week in Estes Park, Colorado.  Unknown to me Sandy and Michael are headed back to Houston where Sandy has taken a new job and they have been added to the short list of Estes Park attendees.

ow six years old and as history goes he does not like new people and has a notorious reputation for growling at them.  After two days, Michael and I were best friends. He who likes no one likes the unusual single guy. Once everyone got back to Houston I asked Sandy if I could spend time with Michael, closely supervised by spend time with Michael, closely supervised by mom of course.  Motives are always mixed in my human experience; I really liked Michael and had come to the conclusion at that point in my life I would never have a son and enjoyed being a father figure, but I also still had a thing for Sandy as well.

I hung out for the next couple of months, Michael and I played… Sandy and I talked. Michael and I bonded instantly, Sandy took a little longer. Michael looked like my son, he was an introvert who thought and had feelings like my son would have. Interestingly enough, Michael’s birthday is 6-20-95, mine is 6-02-59.

As school started that year Michael quickly became best friends (as they are to this day) with one of his classmates Trey. As weeks passed we met Trey’s parents and not long into our life stories Trey’s mother shared that she had heard through a friend of a woman in California who had found out she was pregnant just weeks after losing her husband in a tragic car accident. Terry was also pregnant at that time with Trey, and she was deeply moved by the circumstances and continually prayed for the unknown mother and child a world away. It was just another affirmation of God’s work in Sandy and Michael’s life.

Sandy and I went to lunch together once, had dinner once, and then we were engaged.  I will forever deny that I proposed to her at McDonalds, she might argue differently, but if so she will have to admit that she accepted the proposal of marriage to a guy who did.  We set the wedding for three weeks away, she was to find a dress and show up, I took care of the re

st, which after two days I outsourced to a good friend who was starting an event planning business. It was a perfect wedding, except for the pictures. Never hire a photographer who is available on two week’s notice.

Then we had to tell Michael the news, not really knowing what his real reaction would be. He had real issues with the kissing thing.  It was after church one day when we were going to let Michael know. We were driving to lunch and asked Michael what he learned at church that day, (which at age six most every day would be “I don’t remember”).  This day he remembered the Old Testament story of Ruth who had lost her husband and how a distant cousin Boaz offered to marry her and redeem her family.  Our seemingly difficult task was done.

Sandy later in the week asked Michael what he was going to call me and he said what every son does, “Dad”, but not until after the wedding.  He stuck by his principle and called be Mr. Templeton for the next three weeks.  It was a story we could never have imagined, that has progressed to see the further addition of sons Blake and Carter to our and Michael’s life.

So at my you 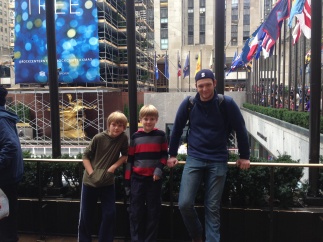 ng age of 43 I became a husband and a father when everyone, including me, thought that was beyond any imagination. Sandy, who had endured the tragic death of her soulmate and the joy and trials of raising a son on her own was closer to being whole. Michael would have a complete family of his own.

It has not been any more of a perfect life after our marriage than it was before, we have all faced tragedies still, made mistakes we deeply regret and bear the scars of life like any other. I would trade years of my life to relive days that I failed to be the father and husband I should have been. But it’s looking upon this, and many other chapters of my life, that I see the broken pieces that our lives often become from the fallen nature of this world, God at the work of repairing and redeeming.

We see in Genesis chapter three the account of the first humans’ decision to disobey God and the tragic consequences that resulted. As a result of their sin, all that God had created and declared good, was now corrupted. God did not walk away and abandon those made in His image but took the first step toward redemption. He made clothes for them to help them with the shame that came as a result of their disobedience. The sacrifice of the animal to cover them foreshadowed the sacrifice of Christ who would come to do more than cover…but take away our sin, and the ultimate hope for all who accept him of the total restoration of our lives and of all creation.

“When the woman saw that the fruit of the tree was good for food and pleasing to the eye, and also desirable for gaining wisdom, she took some and ate it. She also gave some to her husband, who was with her, and he ate it. Then the eyes of both of them were opened, and they realized they were naked; so they sewed fig leaves together and made coverings for themselves.”

“The Lord God made garments of skin for Adam and his wife and clothed them. And the Lord God said, “The man has now become like one of us, knowing good and evil. He must not be allowed to reach out his hand and take also from the tree of life and eat, and live forever.” So the Lord God banished him from the Garden of Eden to work the ground from which he had been taken.”

One thought on “Broken but Redeemed”

We have two Websites: