This year marks the 40th anniversary of Mars Hill Productions! In this devotional series, president, Fred Carpenter is reflecting on the important lessons of God that have guided us in ministry and led us into a deeper understanding of His ways.

“However, so that we do not offend them, go to the sea and throw in a hook, and take the first fish that comes up; and when you open its mouth, you will find a shekel. Take that and give it to them for you and Me.” – (the words of Jesus to Peter when he was challenged by the tax authorities as to whether or not his Master paid taxes) – Matt. 17:27

Several years ago, as we were approaching another hot Houston summer, Doug Whitehead, our VP of Administration informed me that one of the two Mars Hill air conditioner units on our roof had gone out. The AC unit was not our landlord’s responsibility, it was ours. We talked about our options: hold off and endure the heat until we were in a better financial position, or bite the bullet and purchase a replacement unit.

Whatever our decision, we determined that the first thing to do was to get up on the roof and assess the situation; the type of unit, its location, etc. Upon doing our diligence, we discovered something very unusual. Much to our amazement, next to our dead unit, there was another unit in perfect condition (a third unit) just sitting there. Before we moved into our space, it was occupied by a restaurant which needed three AC units to handle a capacity crowd. When we moved in, that third unit was never connected, and it was now available to us!

We marveled at God’s provision! The first thought that came to my mind was the fish story from Matt. 17. God had that fish swallow the coin to pay the tax before Peter even knew it was needed. From that AC experience, I learned a lesson that has set a pattern for me to this very day. END_OF_DOCUMENT_TOKEN_TO_BE_REPLACED 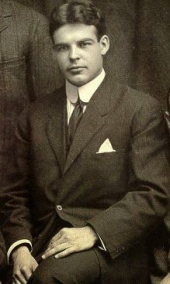 In Cairo, Egypt, at the end of a garbage-lined alley, in a poorly kept grave yard, there is a grave stone with this inscription . . .

Apart from faith in Christ there is no explanation for such a life.
“Go ye into all the world and preach the Gospel to every creature.”
– St. Mark XVI 15

An heir to the Borden Milk Co., William was born into affluence in Chicago, Illinois on November 1, 1887. In 1894, William’s mother became a Christ follower and she began taking him to Chicago Avenue Church (now Moody Church). William soon responded to the gospel preaching of Dr. R. A. Torrey, turned to Christ and was baptized.

When William graduated from high school in 1906, his parents offered whatever he wanted as a graduation present. He chose a trip around the world. For three months, he traveled by boat, train and on foot. He came home convinced that he wanted to be a missionary. His father saw this as a youthful aspiration, and assuming he would grow out of it, sent William off to Yale to earn a business degree.

Athletic, handsome and one of the most popular students at Yale, William started a morning prayer group that soon spread across the campus. By the end of the first year, 150 freshmen were meeting weekly for Bible study and prayer. By the time William was a senior, 1,000 of Yale’s 1,300 students were meeting in such groups. END_OF_DOCUMENT_TOKEN_TO_BE_REPLACED

A devotional from Fred Carpenter, inspired by John 21…

Can you imagine, walking on the beach with Jesus after His resurrection. That was the scene of an intimate encounter between Jesus and Peter (Find the full account of this story in John 21). Prior to Jesus’ crucifixion, Peter 3 times denied he even knew Jesus. Yes, Jesus already knew what was in Peter’s heart. He was giving Peter the opportunity to walk out the healing he desperately needed after his failure. Jesus then went on to explain to Peter that he would eventually die a martyr’s death. John, who would live out his natural life on the island of Patmos, was following behind. Looking at John, Peter asked, “Lord, and what about this man?” Jesus said to him, “If I want him to remain until I come, what is that to you? You follow Me!” (John 21:22).

“What is that to you? You follow Me!” For those of us who tend to compare ourselves to others, or who think we know what we need to have, to be or to do in order to be fulfilled, these words can be extremely hard . . . or incredibly comforting.

One morning, years ago, I was having a quiet time with God. Well actually, I was “belly-aching” to God. The English version of The HOPE (a dramatic video presentation of Creation to Christ) had been out for quite some time, and we had completed a handful of translations. All of our work was now related to creating and disseminating even more translations. Most of our production staff who helped create The HOPE had moved on to other things. Production people enjoy exciting new challenges, and cranking out translations of The HOPE was certainly not as creatively challenging as producing it the first time around. As I compared myself to others on my team who had moved on to new challenges, I felt like I was, in a sense, left holding the bag.

Everywhere I went, well-meaning people asked me, “So, are you working on a new project?” “No, we’re still working on The HOPE.” I would reply. Then I would feel the need to explain that each language version of The HOPE was like a new project, or that writing a 65-lesson study guide was a huge challenge in and of itself. I suppose I was trying to somehow say we were still a creative and productive ministry, even though we weren’t working on “a new project.” I understood that my significance is not in what I do, but rather in who (and Whose) I am. But still, I felt like my significance was under attack. END_OF_DOCUMENT_TOKEN_TO_BE_REPLACED

We have two Websites: